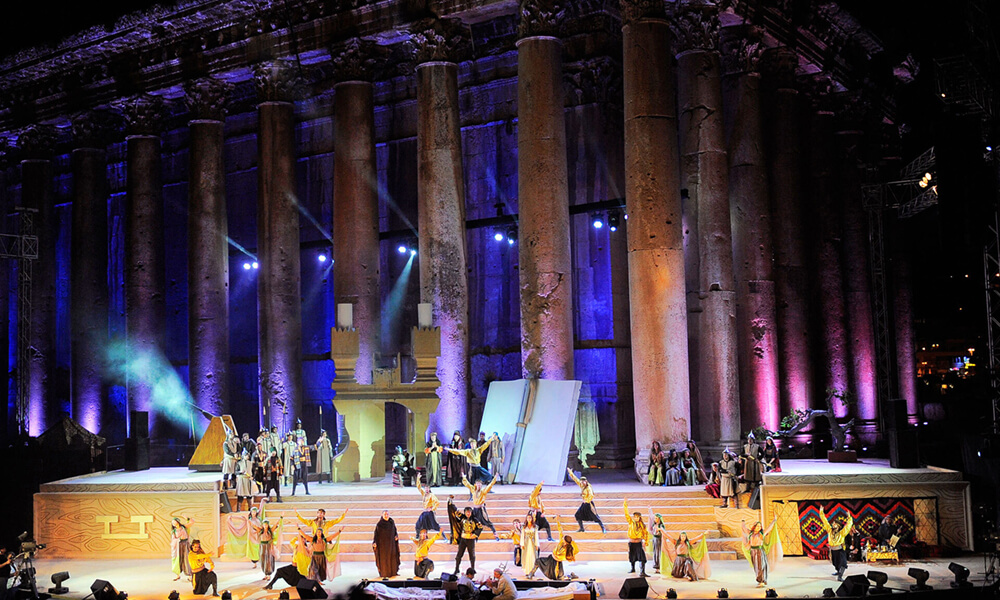 The Baalbeck International Festival (مهرجانات بعلبك الدولية) is a great cultural event in Lebanon that dates back to 1955. After one year, Lebanese president Chamoun gave it its current name and discussed its potential for tourism and Lebanese culture promotion. Due to its great success amongst Lebanese and tourists from all over the world, a Lebanese drama school was established in 1966 for the promotion of works done by local Lebanese authors.

However, Baalbeck International Festival was paused during the Lebanese Civil War (1975 – 1990) and was only resumed in 1997. Cultural events such as Lebanese Nights, rock and pop music as well as ballet and theater regained their past location with over 40,000 yearly spectators watching in the unique historic setting of Baalbek.

The world popular Lebanese singer Fairuz, nicknamed “jewel of Lebanon”, began her career with Baalbeck Internation Festival. She kept performing the festival’s stage for several years and the two were united in their endeavors to bring Lebanese culture to the world stage.

Since then, Baalbek International Festival has become one of the most prestigious events in the Middle East with an amalgamation of traditional and contemporary music genres that bridges the gap between East and West. People from around the world go to the city of Baalbek in the Beqaa Valley just to attend the great Lebanese annual festival. During the Baalbeck International Festival, the ancient Roman Acropolis becomes a platform and a stage for amazing classical music, dance, theater, opera, and jazz as well as modern world music are performed during July and August. The Roman acropolis is dramatically lit up for the occasion to accentuate the atmosphere of the site, thus audiences find themselves stunted by the ancient citadel which surrounds them.

On the 5th of July 2020, Baalbeck International Festival presented the first cultural event and premiere in the middle east after the COVID-19 outbreak with the main theme being “The Sound of Resilience”. This non-profit concert was performed by the Lebanese Philharmonic Orchestra with the Choirs of the Antonine University, Notre Dame University, and Qolo Atiqo. The event was welcoming to young Lebanese musicians under the baton of Maestro Fazlian and with the participation of Rafic Ali Ahmad. The magical festival also presented a visual show featuring archive photos and 3D mapping and visual creation by Jean Louis Mainguy.

For the second year in a row, the Baalbeck International Festival “Shine on Lebanon” went live on July 9th to spread hope, love, joy, and culture amidst various Lebanese crises and fight against darkness with music.

Local performers such as Blu Fiefer, Postcards, Beirut Vocal Point, Zef, Makram Aboul Hosn, and more were featured during this event. Thus, encouraging local talents, musicians, and artists to shine in the dark! “These proud artists’ performances are a testament to a legacy that will never fade away, a legacy that speaks of Lebanon’s rich cultural identity” the festival direction shared. If you’re interested to catch up on Baalbeck Internation Festival 2021, find the stream link below.